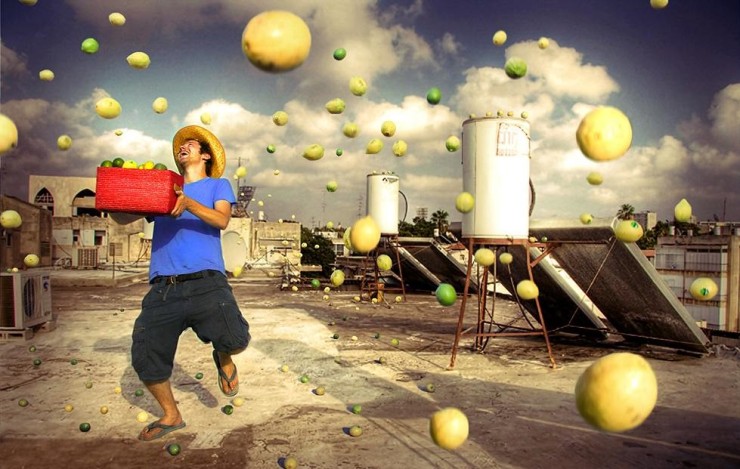 These are tough times for the Liberals, they have been carpet bombed with lemons since the 2018 spill. But ScoMo is holding his ground like a champion and is turning these regrettable lemons into a renewable energy source, invigorating the party and illuminating the voting bloc. His disproportionate energy level and interminable apple-polishing are becoming an inspiration to all Australians and politicians alike. No ascorbic explosion can slow Scott down, he sucks up every sour bomb thrown at him and uses it to make the most scrumptious outcomes. When life hands Scott Morrison a lemon, Scott turns it into sweet lemonade.

His genius has spiked my interest like no other leader. I needed to know everything about him, including the effortless prose which pours out of mouth whenever it is not occupied with food. I hounded his skillful PR team for months until they relented and granted me an interview.

When I finally got to meet Australia’s Franklinian virtuoso it felt so dreamlike that every time he answered one of my questions I had to bite down on my lower lip. To my utter surprise, Scott Morrison was equally excited to meet me and confessed that he too had been anticipating our meeting. So much so, Scott was unable to contain his excitement and blurting out that he was in the process of creating the ultimate winning campaign and slogan for the 2019 Federal election – a lemon recipe book! Catching my breath, I asked as to what had inspired Scott to author a recipe book. Scott responded, “We are harvesting more lemons than we can handle, I thought to put them to good use.” Then quickly adding, “I live by example, I also want to show to the Australian public that I do my bit to save the earth. I’m trying my hardest to recycle our lemons as much as possible, as we’ve never had such a bountiful harvest.”

Impressed by his live by the lemon, die by the lemon approach to life, I asked Cheffy Scotty what will be the title of the book. He timidly smiled and admitted that he was still tossing between “Gone with the Lemons” and “Lord of the Lemons.”

I am thrilled to share with my readers the 2019 political scoop. Without further ado let’s sink our teeth into the world exclusive Cheffy Scotty’s mouth-watering lemon recipes!

Ingredients: When Scott Morison was asked by Alan Jones, “Will there be more missions for this man [Malcom Turnbull] to spread his own discredited views?” Super-alpha Scott Morrison laid down the rules and responded with a resolute “No.” Alan should now ask ScoMo as to why Turnbull was sent to negotiate the transfer of the remaining Naru children.

Instructions:
1. Squeeze 10 bitter-green lemons and pour juice into a large bowl adding 5 tablespoons of lemon rind, 1 egg, 1/2 teaspoon of sugar and a good pinch of salt. Whisk vigorously until ingredients combine.
2. Place bowl on simmering water and slowly stir taking care not to scramble the egg. Stir until ingredients thicken into a ray of radiant sunshine yellow.
3. Remove from heat and add a full brick of cold butter to aid the cooldown and cut through the vinegary pungency.
4. Whisk vigorously.

Ingredients: Shortly after Julie Bishop’s resignation Scott Moron commented, “She [Julie Bishop] is a role model.” However, Scott neglected to retract his statement when Julie Bishop retracted her resignation.

Instructions:
1. Micro slice 2 lemons making sure to retain their delicate shape. Creating a waterproof decorative seal is very important for this recipe.
2. Coarsely grate 2 lemon peels taking care not to bruise the skin so to retain maximum acidity.
3. Sparingly sprinkle brown sugar on top of a hot skillet. The sugar exists only to caramelise the lemon seal, not for sweetening purposes.
4. Place lemon slices on top of the sugar in an overlapped, repetitive circular pattern in order to package the sour batter and preventing it from seeping out.
5. Add flour, a cup of sour cream, 10 tablespoons of bicarbonate soda, salt, the coarsely grated lemon rind and ½ brick of butter into a bowl. Do not skimp on butter, it acts as an acid regulator to stop the sponge from becoming dry, shriveled and brittle.
6. Whisk all ingredients together, pour on top of the caramelised lemon slices and slow cook in the oven.
7. Once cooked, flip cake onto a plate to showcase the lemon decoration and to hide the sour sponge. Cut cake in half and discard. Use the remaining cake as a zingy appetiser.

Instructions:
1. Make two deep incisions into each lemon in the shape of a cross.
2. Stuff the incisions with copious amounts of coarse salt.
3. Once the lemons are gorged with salt, place into a mason jar firmly ramming each lemon as far down as possible so to release their citric goodness and to cram as many lemons into the jar as possible.
4. When the jar is stuffed to its maximum capacity, add the rest of the spilled salt.
5. Cover lemons with lukewarm water.
6. Seal the jar, turn it upside down and give it a few shakes.
7. Cure and use when seasoning is required.

Ingredients: Upon O’Dywer’s resignation announcement, Cheffy Scotty stood by Kelly in solidarity and said, “I support her choice, I support all women’s choice. I want them to have more and more choices.” Scotty is a man of his word, he has provided O’Dwyer with the only choice.

Instructions:
1. Using steel wool, scrub 1 kilo of lemons under running water. Make sure to thoroughly clean every bit of dirt off the rind.
2. Place them in a large pan, cover with cold water and bring to a fast boil.
3. Remove lemon from the pan, scoop and separate the pulp from the peels and then finely slice the peels.
4. Return lemon pulp and lemon rind into the pan, adding sugar. Bring to boil again making sure to occasionally stir so that the mixture does not stick on to the sides of the pan.
5. Place glass jars into a pre-heated oven and cook on high heat so to eliminate any contamination.
6. Once marmalade is fully cooked, skim off impurities from the top and let it cool to room temperature.
7. Ladle mixture into the sanitised hot jars and seal immediately.
8. Store in a cool, dark place.

Ingredients: An unofficial Russian source anonymously reported to an undisclosed junior parliament staffer who then told an unnamed reliable ABC reporter after a couple of bourbon ‘n’ cokes and quick shag in the unisex loo at the local pub, that during a ministerial meeting Cheffy Scotty complained, “Spy conspiracies are hard. Really, really hard.”

Ingredients: “Retirements won’t hurt us at polls.” Cheffy Scotty. (Nor will the NLC investigation.)

Instructions:
1. Pour 2 cups of heavy cream and 5 cups of sugar into a pan. Gently cook over the stove until sugar is fully dissolved.
2. Pour in the juice of a bush lemon and stir until mixture has thickened.
3. Pass mixture through a sieve and discard the lumpy bits.
4. Set mixture aside to continue its cooking process until it cools to room temperature.
5. To construct pudding select tall, clear glasses so that the decorative layered pattern can be showcased.
6. Place crisp biscuit crumbs on the bottom of each glass, then plop a good amount of the cooled down bush lemon parfait, followed with a generous layer of whipped cream and a sprinkle of chopped candied lemon rind. Rinse and repeat until glass is full.
7. Refrigerate. Sweet tooth satisfaction when needed.

Instructions:
1. For an authentic Neapolitan experience turn on the stereo and listen to a Rossini aria whilst prepping. I recommend “Una voce poco fa’ ” since Rosina is the quintessential Mediterranean chick (if she doesn’t put you in the mood to cook up a storm I don’t know what will.)
2. Chop the top off of 4 lemons using a sharp cleaver. Scoop out pulp.
3. Juice and grate the zest of 3 lemons and place into a pan.
4. Add 2 cups of water and 6 cups of sugar and slowly bring to boil.
5. Simmer until a thick, golden bright syrup is formed. Allow to cool to room temperature.
6. Add a couple of shots of limoncello liqueur to mixture and stir.
7. Freeze overnight.
8. Shave sorbet with a large sharp knife making sure to use long gliding motion. Freeze overnight.
9. The perfect invigorating palette cleanser between rich, complex courses. Best served on a cold plate.

As grateful as I was for having been given this flavourful exclusive, Cheffy Scotty resisted my request to his “ScoMo Lemon Meringue Losing Face Pie”. He did, however, share a sneak peek salivary gland-pinching picture and the Liberals’ 2019 campaign slogan. Recipes will be released in full in August. I can’t wait!

For those of you who sway even further to the left, rest assured that Bill Shorten will not be outdone and is busy at work fertilising freshly planted lemon groves. Bill 2.0’s recipes will be slow-released in the coming months. Yummy, yummy.

And if you thought that Cheffy Scotty bears ill-will towards Bill 2.0’s cultural appropriation, think again! Since ScoMo and the Liberals live by the lemon slogan, they offer nothing but cooperation, comradery and undisclosed deals with the ALP.

Best of luck, guys. Australian voters are anxiously awaiting to experience these delights in the coming months. We can’t wait for August!